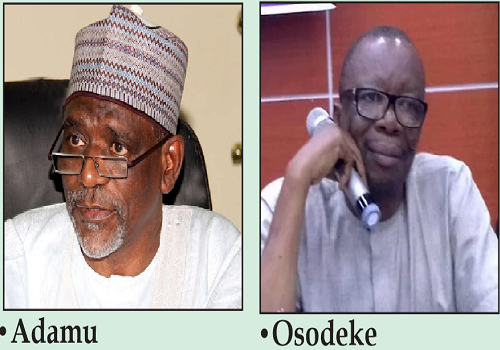 ASUU coming to equity with unclean hands
The strike by the Academic Staff of University Union (ASUU) is taking a crushing toll on Nigeria. Basically, ASUU has legitimate grievance. It is insisting that the federal government uphold its earlier agreements with ASUU before members can return to work. The earlier agreements were to increase government expenditure on university education and thus, increase the remuneration for ASUU members, and improve academic standards and the learning environment in Nigeria universities. Undoubtedly, the Buhari administration has reneged on agreements, ruined the economy, betrayed the trust and hopes of Nigerians, and abdicated its most essential constitutional responsibilities. However, despite the general frustration with the overall failure of his administration, most Nigerians are not aficionados of ASUU. For, over the years, ASUU soiled its hands; it is coming to equity with unclean hands.

One of the major problems of ASUU is greed and its doppelganger, unrealistic expectations.  Over the years, the moral squalor, hedonism, and obsession for quick money that engulfed the Nigerian society took hold of our lecturers and professors; and these supposed polymaths lost their sense of mission. They became too distracted by the pursuit of money and instant gratifications; and lost focus of the demands of their scholarly, prestigious, but impecunious profession. They now covet the opulent lifestyle of the business tycoon and the scandalous remuneration and immoral profligacy of Nigerian politicians.

A commentator aptly summed it up: “The real reason ASUU is on strike is that lecturers are comparing themselves with politicians in earning.” Yes, they are jealous of the earnings of the politicians, especially, those in the National Assembly. They resent the fact that politicians, most of whom are not as educated as members of ASUU, earn so much more than them. The unconscionable remuneration for politicians is an aberration. It is robbery, with a facade of legitimacy; that needs to be addressed. It is not an acceptable benchmark for determining the salaries of other professionals.

Devising ways of making quick money, the lecturers/professors descended from the sublimity of an honourable profession to wallow in shenanigans, like “sorting out” (a euphemism for getting a good grade when in actuality you failed), selling handouts, and demanding bribes from students. They introduced corrupt practices and all forms of abuse into the university admission process. They steal and share money designated for academic research and the upkeep of the universities, and misappropriate university internally generated funds. Not surprisingly, they are vehemently opposed to the implementation of the IPPIS Salary Structure within the university system. The IPPIS Salary Structure will expose their financial intrigues and thievery.

A teacher is a surrogate parent. Therefore, the society expects university lecturers to be protectors, mentors and role models, and definitely, not sexual predators. Lamentably, in their sexual voracity, some Nigerian lecturers harass female students, insisting on sleeping with them before they can pass their exams. There have been instances where a lecturer openly told a female student that, to pass the course, she must sleep with him, which is unabashed sexual harassment. In any sane clime, such barefaced sexual pestering will get the lecturer fired, and possibly, prosecuted and jailed. In intimidating and railroading unsuspecting, innocent, and sometimes, naïve young female students into having sex with them, the lecturers are betraying the trust reposed on them by parents and the entire society. Many ASUU members are sexual predators culpable of sexual harassment and statuary rape; and should be in jail. Lamentably, they are strutting around as paragons of morality and chastity.

Those that we entrust with the education of our children, which is, by extension, the future of the  country, should be, not just civilized and enlightened, but, exquisitely civilized, and elaborately enlightened. Civilization and enlightenment founded not on the number of academic degrees, titles and other prestigious frills, but on “taming the savageness of man”. Nigerian universities are teeming with uncivilized and unenlightened minds, with many degrees and colourful academic titles. Such individuals are arrogant, touchy, extremely prestige-conscious, resentful of independent thought and intolerant of contradicting views. In their false feeling of importance and empty ogaism, they intimidate the students and browbeat them into passivity and conformity.

In many universities, students are coerced into signing the “Indemnity Form”, which is tantamount to taking an oath to be of good conduct. What is good conduct, in this context? It is servility, submissiveness and conformity. At the Obafemi Awolowo University, a number of students were suspended for six semesters for insulting a professor. You are forced to wonder what necessitated such merciless punishment: is the insulted professor an emperor, and the insulting students, slaves? The barbaric cruelty of some ASUU members have repeatedly been made manifest, as vice chancellors have routinely called in the police to shoot and kill protesting students, even, when such protests were elicited by legitimate grievances.

These Procrustean enforcement of “good conduct” protects and reinforces the pretensions and arbitrary powers of the lecturers/professors and university administrators at the expense of the freedom, of expression, of the students, and the intellectual freedom and ferment of the university environment. Reckless idealism, starry-eyed optimism, hot enthusiasm and other youthful proclivities and their natural vents in nonconformity and dissent must be allowed a free reign in our universities.

After all, the object of education, especially university education, is to inform and enlighten the mind; and invariably, unshackle it, liberating it from, among other things, fear, timidity, passivity, and docility. On the other hand, ruthless enforcement of tameness and submissiveness shackles the mind. ASUU members must have lost their sense of mission, which explains their assiduous labour in negation of the object of education. In repudiation of the purpose of education, which is to liberate the mind, they are entrapping the mind.

It is very unlikely that the ASUU/federal government impasse will end soon. In its self-righteousness, ASUU is unforgiving and unyielding. In addition to their demonstrated penchant for foolish talk, federal government negotiators are snooty and negligent; and obviously unperturbed by the unending closure of the universities. There is a desperate need for compromise from both sides; they must endeavour to meet each other half-way. So that the students can, at least, resume their education.