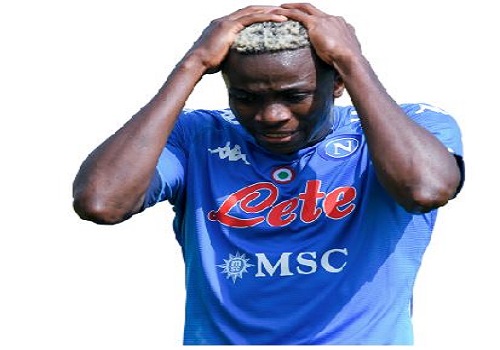 That Victor Osimhen will not be part of Napoli’s squad heading to Scotland for the UEFA Champions League (UCL) clash has excited Rangers.

The excitement in the camp of Rangers stemmed from the fact that the £82m Nigerian international striker has been ruled out of the tie following the injury he sustained on Day One of UCL in Napoli’s 4-1 bashing of Liverpool.

The forward joined the current Serie A leaders in 2020, with Napoli breaking the bank to bring the now 23-year-old forward, making him the most expensive African player of all time.

Interestingly, it was with the proceeds of this deal that the Ligue 1 side reportedly made an attempt to sign Alfredo Morelos, with the Gers said to have turned down a £16m offer for the Colombian.

But now, Osimhen won’t be leading the potent Napoli attack after picking up a serious injury in the Italian’s 4-1 Group A opening day crushing of Champions League rivals Liverpool.

The attacker went off for Giovanni Simeone just before half-time in the victory and Napoli have since confirmed that the player won’t be available for five weeks due to a bicep injury.

“As scheduled, Victor Osimhen underwent diagnostic tests this morning (yesterday) which revealed a second-degree injury to his right bicep,” reads a club statement. “The blue striker had already started carrying out therapies.”

But when a team like Napoli loses a player of such value and significance it is of course a major blow, Rangers were subsequently boosted by Napoli losing Osimhen.